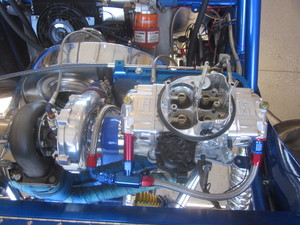 What Size Carb for what size VW engine formula

Part number:
WSC
Description:
The question is put many ways, but comes down to: how big of a carb can I put on my VW air cooled engine or what size carb can go on my engine?

This is a mathematical equation formula that you can use to see if you are planning the right carb(s) for your engine.

Keep in mind this formula DOES NOT take into consideration your:
cam choice
heads or their flow or valve size
exhaust
driving style
desired BLING factor
your willingness to either believe it or not

Now, most people would run a 40mm 2 barrel like an hpmx, idf or a drla. But doing so means you are running 2 x 40 or 80mm of throat. So you can see that that is more than double what the math calls for.

However true the math is, remember that it does NOT take into consideration your engines capability with regard to SUCK & PUSH: cam choice, valve size choice, head flow characteristics, exhaust size & driving style.

Doghouse recently broke-in a 2387cc engine that had dual 40's on it. Initially, we told the customer we would not recommend those small carbs on that big engine.
Boy did we eat crow when we were done with the break-in. The engine not only ran fine, it ran great.

On the other hand things can change: for example I just attached a 4 barrel Holley 750 (shown) to my 2387cc shown and it runs fine. Ok, so I left out that it ALSO has a turbo blowing the gases into the engine!

We accept the following forms of payment: